A BIT OF HISTORY ON ROBIN HOOD AND SHERWOOD FOREST…

Sherwood Country Park lies just north of Edwinstowe, two miles from Ollerton and 17 miles north of Nottingham on the A614 Nottingham-Doncaster road. The park is within an area which originally bore a Viking name “birch lund”, now known as Birklands. 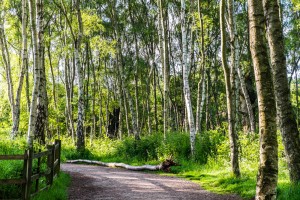 The name ‘Sherwood’ was first recorded in 958AD when it was called Sciryuda, meaning ‘the woodland belonging to the shire’. It became a Royal hunting forest after the Norman invasion of 1066, and was popular with many Norman kings, particularly King John and Edward I. The ruins of King John’s hunting lodge can still be seen near the Nottinghamshire village of Kings Clipstone.

‘Forest’ was a legal term, and meant an area subject to special Royal laws designed to protect the valuable resources of timber and game (Vert and Venison) within its boundaries. These laws were strictly and severely imposed by agisters, foresters, verderers (wardens) and rangers, who were all were employed by the Crown.

In the 1200s, popularly thought to be the time of Robin Hood, Sherwood covered about 100,000 acres, which was a fifth of the entire county of Nottinghamshire. The main London to York road, the Great North Way, ran straight through Sherwood, and travellers were often at the mercy of robbers living outside of the law. Hence the name ‘outlaw’.

Legend has it that Robin Hood was an outlaw living in Sherwood Forest with his ‘Merry Men’ – but did he really exist? 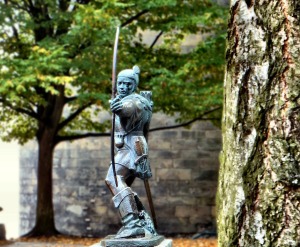 The first known literary reference to Robin Hood and his men was in 1377, and the Sloane manuscripts in the British Museum have an account of Robin’s life which states that he was born around 1160 in Lockersley (most likely modern day Loxley) in South Yorkshire. Another chronicler has it that he was a Wakefield man and took part in Thomas of Lancaster’s rebellion in 1322.

One certain fact is that he was a North Country man, with his traditional haunts as an outlaw in Sherwood Forest and a coastal refuge at Robin Hood’s Bay in Yorkshire

WHEN IS IT THE BEST TIME TO EAT CAKE?…

AWARD-WINNING TEAS AT THE VILLAGE KITCHEN…

QUOTE MONDAY FROM THE VILLAGE KITCHEN…